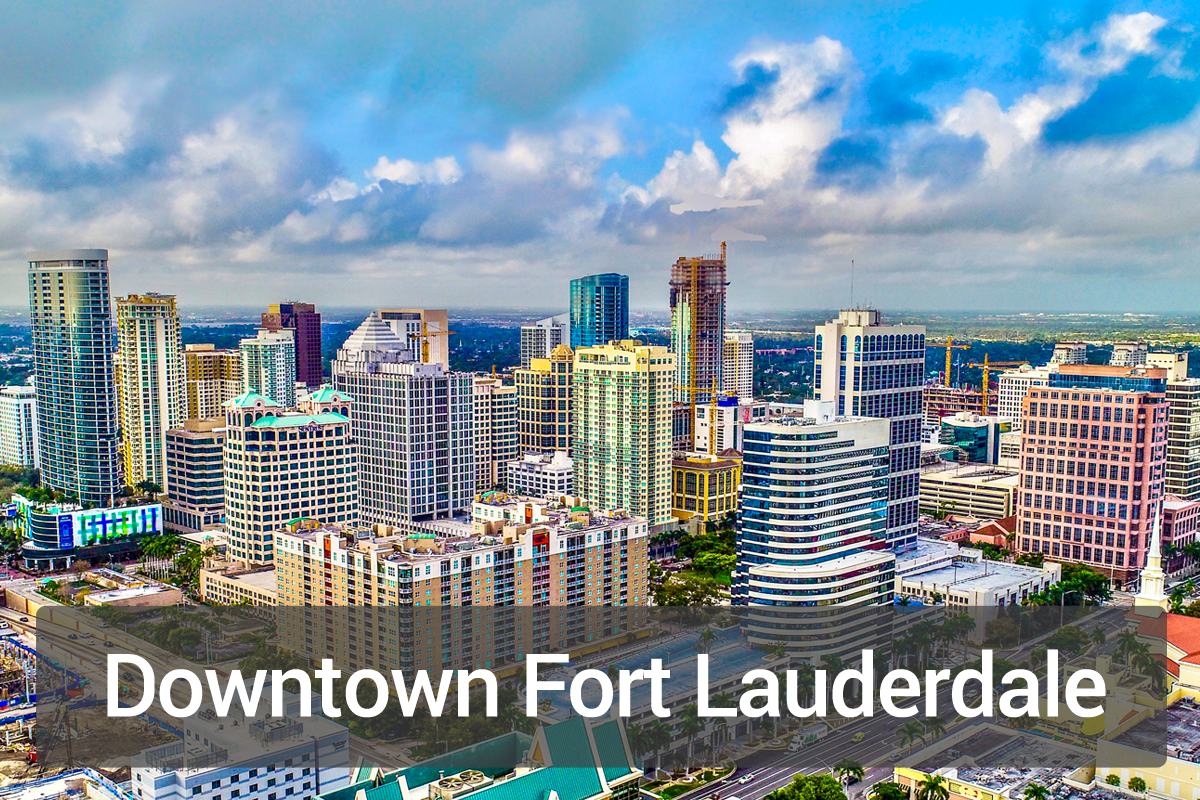 The Downtown Fort Lauderdale district is defined by the city of Fort Lauderdale primarily from the Broward Center for the Performing Arts (the westernmost end of Las Olas Blvd), east to Federal Highway – And from Sistrunk Blvd and NE 4th St in Flagler Village, south to Davie Blvd. For a map of the exact boundaries, click here. Generally speaking, there are surrounding neighborhoods that technically sit outside of the Downtown Development Authority lines, but they are often considered to be downtown by many.

Running through the heart of Downtown Fort Lauderdale, running mostly parallel to each other, are two world famous thoroughfares – Las Olas Blvd and the New River. Both run east (from the ocean) to west (towards the Florida Everglades out west).

On Las Olas Blvd starting at the beach and heading west, you pass directly through the entertainment, shopping, dining and downtown business districts – Visible from a distance thanks to the large (and ever-growing) cluster of high rises. The largest of the high rises are centered on the north and south sides of the New River, the second famous thoroughfare that slices right through the center of the downtown area. The New River is lined on both sides with miles of city dockage – And is the kickoff location each year for the popular Winterfest Boat Parade, one of Fort Lauderdale’s signature holiday events dating back to 1988.

Want to live, work and play in the same neighborhood?  Downtown Fort Lauderdale offers exactly that.

The most common type of homes downtown along the north and south sides of the New River are high rise condos and luxury apartment rentals. Most of these properties are connected by the Riverwalk, a pedestrian-only walkway winding along the river and linking together the neighborhood homes, restaurants, parks and shops. Commonly dubbed “Florida’s Most Beautiful Mile,” the Riverwalk is lined with boats and lush, tropical scenery. In this setting, it’s easy to forget that you’re in the heart of a city’s downtown district.

Fanning out from the New River and Las Olas corridors, many townhomes, single family homes (including waterfront properties) and mid-rise apartment and condo buildings become abundant. Passing through the downtown district (from north to south) is the high speed train which connects various major cities in South Florida and has a stop just north of Broward Blvd – One of the major roads that cuts across Downtown Fort Lauderdale. The Henry E. Kinney Tunnel, finished in 1960, carries Federal Highway traffic directly below the New River and Las Olas Blvd.

It’s also worth noting that easily accessible from downtown is Port Everglades (one of the largest cruise ports in the world), Fort Lauderdale-Hollywood International Airport and Fort Lauderdale Beach. Need to hop on the highway? Also just minutes away is I-95 (north/south) and I-595 (westbound only from Fort Lauderdale while heading south on Federal Highway). Both I-95 and I-595 offer direct connectivity to Florida’s Turnpike.

Copyright Notice – This content has been written exclusively by Jason Taub. It may not be published, broadcast, rewritten or redistributed. © 2020 Jason Taub – All Rights Reserved.